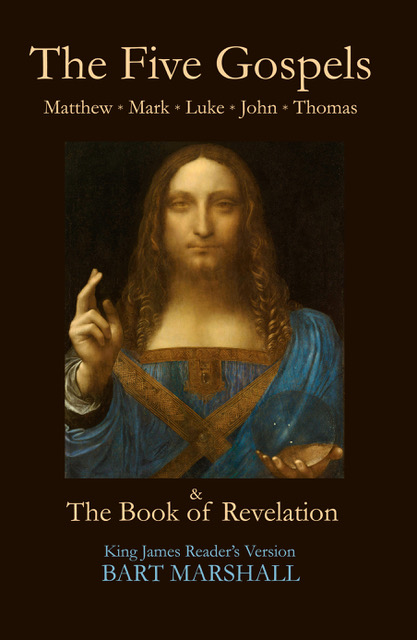 The Five Gospels and the Book of Revelation by Bart Marshall

The first four books of the New Testament—Matthew, Mark, Luke and John—form the core of Christianity in much the same way as the first five books of the Old Testament—Genesis, Exodus, Leviticus, Numbers and Deuteronomy—form the core of Judaism. The books of Matthew, Mark and Luke are known as the synoptic gospels because they are so alike. By contrast, over 90% of the material in John is unique, and John is sometimes referred to as the spiritual gospel. The Gospel of Thomas is also included here because it contains valuable sayings of Jesus that echo and expand upon the teachings in the other gospels. It deserves to have been included in the New Testament, but was not known until 1945, when it was unearthed as part of the discovery near Nag Hammadi, Egypt. I have also included The Book of Revelation because it purports to contain words of Jesus heard in a vision, and has become a key text in Christian literature.

The Five Gospels is excerpted from a larger work-in-progress, The Holy Bible: King James Reader’s Version (KJRV), which I hope to complete and publish in 2022. The KJRV is formatted like an epic poem, which it is, with the verse numbers in a separate column so as to not be in the way while reading. My purpose in creating the KJRV is to provide the clearest, most faithful, most accurate, and hopefully most poetic version of the Bible possible. It is my intention that it speak directly to the reader, and provide a clear understanding of what’s being said, without the need for “expert” commentary or agenda-driven interpretations.